Mistress Rachel destroying yet more slave ass. She pounds them hard until they are wailing and crying. But Rachel loves the sound of a whimpering male and it only makes her want to fuck him harder.

Pinned and pegged…and loving every second

Of course ClubDom has all the cruelest Dommes, including the amazing Jean Bardot on their website. The sheer quality of the strap-on clips they put out is staggering. Visit ClubDom to see whats there for members. Here’s previews of recent clips.

Losers Take Cock In The Ass
Mistress Elena knows that you are nothing but a loser who craves her huge cock in your ass, but you do not deserve even that – not without suffering, anyway. Elena makes her pathetic bitch gag on her cock until drool is pouring out his mouth and she is laughing at his gagging.

Once her cock is wet enough, Elena pounds her slave’s ass with it, making him scream out in pain as she rips his asshole open. But Elena has even more in store for the bitch, as she locks him onto his back and pile drives his ass, mercilessly bending him like a pretzel. When Elena has finished fucking him, she tears into him, humiliating him for being a cock craving faggot as she strokes her dick, laughing at the power she has over him.

Fucking his tenderized ass
Mistresses Jean, Coral and Amadahy are going to rip this bitch’s ass wide open with their strapons, but these sadists are not content with just pounding his ass meat; they want it to hurt to. So Jean and Coral subject the bitch to a harsh caning, then make him get on the fucking bench.

Each of the Mistresses takes a turn fucking his ass deep and hard with their cocks while the bitch has to suck the cock of one of the other Mistresses. By the time Amadahy is plowing his ass with her dick, the bitch is begging for mercy, but none will be had. After making his ass gape from their cocks, the Mistresses cane the bitch again until he is squirming off the bench and futilely trying to escape the pain. When they are satisfied, the Mistresses admire the marks they have left on his ass while letting their slave know that his punishment is far from over….see more clips

I love the fact that Mistress Alison actually intimidates her subs by her sheer size. She stands at over 6ft tall and when she wears her strap-on a man can suddenly feel very small and weak. 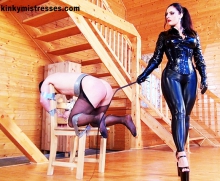